Blue & Gold Trust Official Website
Joe Dines
Articles on the history of Lynn Football Club tell you that prior to 1914 King's Lynn Football Club was known as Lynn Town. Now that might be the case – but then again this photo from 1908 suggests something different, perhaps what the club was known as, and what it wanted to be called were two different things. Equally “Linnet” writing in the Eastern Football News in 1922 still referred to the club as Lynn Town as did Lynn News match reports in the 1950's . 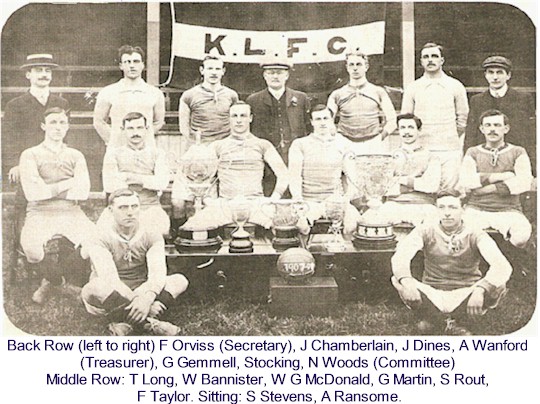 Under the letter K is Lynn half back Joe Dines – the only Lynn player to have a slate plaque to mark the house where he was born.
Born 12 April 1886 Joseph Dines was the youngest of four sons of Frank and Josephine Dines of 4 Whitefriars Terrace. His early football was with Lynn All Saints and then Lynn United before being “poached” by Lynn Town. He started in Lynn Reserves and then went on to make his first team debut on 13 February 1904 against Peterborough Loco in the Dereham Charity Cup.
He then became a Lynn regular, taking part in Lynn's FA Cup encounter with Aston Villa in 1906 and receiving his county colours that season. He was also in the Norfolk team that won the Southern Counties Championship in 1908 and made appearances for Norwich Reserves and Woolwich Arsenal Reserves. He trained as a teacher in Peterborough and returned to Lynn – becoming an assistant master at St Margaret's School in the Millfleet
He took a teaching job at Highlands School, Ilford in 1910 by which time he had already started on an International career that was to lead to 24 caps with England's amateurs and had played for Queen's Park Rangers. At the time Ilford were a renowned amateur team playing, ironically, at Lynn Road, Ilford.
It was in the 1912 Stockholm Olympics that Joe Dines played in all three games for the Great Britain & Northern Ireland team as they retained the gold medal won in 1908 with victories over Hungary 7-0, Finland 4-0 and Denmark 4-2 in the final on 4 July.
Resisting attempts to persuade him to become professional, he appeared occasionally for clubs such as Walhamstow Avenue, Millwall and even one appearance for Liverpool when they visited Chelsea, Liverpool winning 2-1.
He is also reported as still making the occasional appearance for Lynn as late as the 1913-14 season.
He made 149 appearances for Lynn – scoring 28 goals. One of his brothers also made a brief appearance for Lynn – in that match Joe lined up with the opposition – Peterborough College.

Joe married King's Lynn born Ethel Burgoyne in 1913 and with the advent of war he volunteered to join the army in November 1915 rising to the rank of second lieutenant in the King's Liverpool Regiment in June 1918.
Often known as “The Smiling Footballer”, Joe was killed by machine gun fire in Pas de Calais on 27 September 1918. He is buried in the Grand Ravine British Cemetery in Havrincourt, France.
With thanks to Richard Taylor for help with this article.